How to Open an Oyster Shell-In Easy Way!

As an Amazon Associate, I earn from qualifying purchases.

In this article, we will be mentioning some of the simplest methods that will help you open the oyster. With these methods, you can easily open an oyster without feeling the need of using an oyster knife.

One of the easiest ways to open oyster shells is to steam cook them. Though oysters should be served cold, this method is worth trying. First, take a large bowl or pot to put the oysters in. Fill the bowl with enough water so that you can create a stream. Then, close the lid and put it on the stove for 7 to 8 minutes.

Steaming the oysters will make the shell soft. So when you bring them out, you’ll have no problem opening them. Since oysters are served cold, you should put them in the refrigerator to cool down once you’ve opened them.

Screwdrivers can also help you open oyster shells. When it comes to shaping, screwdrivers and oyster knives seemingly share a similarity. Make sure that the screwdriver you’re going to use is clean. When you’re about to open them with a screwdriver, you’ll need force and care. Otherwise, you might end up damaging them instead of shucking them.

In order to open oyster shells with a screwdriver, you must slide the tip inside. For a moment, it’ll get stuck inside so, don’t worry about it. Once you start to feel the force, move it back and forth inside the hinge. You should repeat this action two to three times before it pops open.

Like steaming, heating is another effective and great way to shuck oysters without making use of an oyster knife. For this method, you should use a boiler or a griller to do the work.

The first step is to place the oysters on a griller tray and heat them up properly. Then, you need to cook them. Make sure when you’re cooking them, you’ve placed the hinges in a way that you can see them popping up. Try to avoid overcooking them. If you overcook them, they’ll start burning from the inside; which ruins the rich taste oysters have.

Among all of these methods, the oven method takes the least effort of oyster shucking without a knife. In this method, you’ll be putting the oysters in an oven; a place that is heated up already. So, it’s safe to say this method’s capable of working instantly.

If you want to open oysters in this method, you have to turn on the oven and leave it to heat for some time. After that, put the oysters in a pie pan and leave them inside the hot oven for 3 to 4 minutes. Eventually, the shells will start popping out all at once when you bring them out.

Another effective method to use for opening oysters easily is the microwave method. In this method, you need to take your oysters, put them on a plate, and cover them with wax paper. Then, microwave them for 55 seconds at full power. After microwaving them, you must let them sit in there for about 20 seconds once the microwave has gone off and then take them out.

If you think using the microwave method might end up cooking them instead of opening them, then don’t worry about it as it won’t happen. They’ll only get slightly warm. In this case, you need to allow them to cool down. Once they’ve cooled down, open them using a little effort with an old kitchen knife of yours. You’ll be amazed at how easily you’re opening them up.

Though there’s a specific knife for opening oysters, paring knives for everyday use are also great for using to do this job. To open oysters with a paring, you should gently insert the tip of the knife 90 degrees into the hinge of the oyster. Then, you must shuck the oyster one by one.

It consumes a lot of time to open oysters with this method; although it is as effective and fast as doing it with an oyster knife.

For the stabbing method, you’ll need to make use of an actual knife. So, you must remain careful if you’re going to open oysters using this method.

At first, grab hold of the oyster with your left hand and flat side up with the mouth facing you. Then, twist your wrist clockwise and counterclockwise so that you can work the point of the knife between the leading edges of the shells until they penetrate.

Once you’re able to break the seal successfully, you must insert the blade fully and turn the oysters sideways with your left hand. Therefore, the knife will be able to severe the eye. Now turn them over and cut the bottom abductor muscle to the point of attachment in the shell.

You can also try to freeze the oysters at a certain temperature to open them up. Place the oyster in the freezer. however make sure that you dont end up over freezing them. When oysters get hit by freezing cold, they die.once you take them out from the frezzer.they will release some temperature and warm up. The second they start thawing, this will eventually open up the oyster.

Opening up the oyster is one hell of a task, especially when it’s fresh. However, that doesn’t mean you don’t to experience the mouthwatering flavor of the oysters. We have mentioned some simple yet highly effective methods to open up the oyster without the help of a knife. Do give them a try and find out which method works the best for you.

As an Amazon Associate, I earn from qualifying purchases.

How to Open an Oyster Shell-In Easy Way!
Buy this item

How Does a Water Filtration System Work?

How to Use an Electric Knife Sharpener?

How to Use a Meat Thermometer in the Oven

How to Use a Digital Meat Thermometer

We will be happy to hear your thoughts 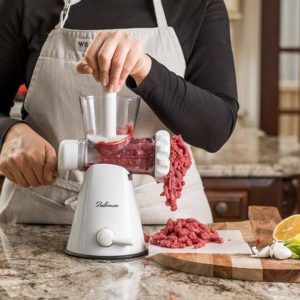